Mapping dyslexia: A study found that the area that sorts and stores the auditory building blocks of language, in yellow, is similar between dyslexics and a group without reading problems

A faulty connection between where the brain stores the auditory building blocks of language and where it processes them may be to blame for dyslexia, a new study suggests.

The findings represent the first neuroanatomical evidence that the vexing spelling and reading disorder striking people who otherwise can speak a language fluently lies in a connectivity problem in the brain’s white matter, where nerve fibers relay electrochemical signals.

Various degrees of dyslexia strike about one in 10 people, making it difficult for them to analyze and assemble letter combinations and relate them to the auditory packets of learned language, called phonemes.

Scientists have debated whether those with the disorder were accurately forming and storing phonemes, or whether impeded access to them complicated the task of synthesizing sounds with written, visual symbols.

Learning language is innate  babies across cultures, time, language and demographics acquire it at roughly the same age and in the same stages. But reading takes years of conscious, cumulative effort to associate abstract symbols with an acquired database of sounds.

Those who fail or struggle with the process often face further cognitive difficulties, emotional problems and sometimes severe social consequences.

A Belgium-based research team delved into the puzzle by mapping the brain activity involved in phoneme sorting. They used functional magnetic resonance imaging machines to scan the brains of 45 college-age adults (23 with dyslexia, 22 without) while they distinguished among a variety of sounds, some of which differed in subtle ways, then built a sophisticated correlational map.

Both groups were able to distinguish and sort those sounds accurately, though the dyslexic group did so more slowly, according to the study, published online Thursday in the journal Science. Both groups also showed consistent neuron firing patterns as they sorted these sounds, the study found.

“Quite to our surprise we found that the phonetic representations are perfectly intact in dyslexics,” said Bart Boets, a clinical psychologist at Catholic University of Leuven, in Belgium, lead author of the study. “They are just as robust and distinct as in typical readers.”

The researchers then examined how well the 13 studied areas of the brain communicated with one another  (12 were areas known to be involved in language and speech; one control area was associated with vision). 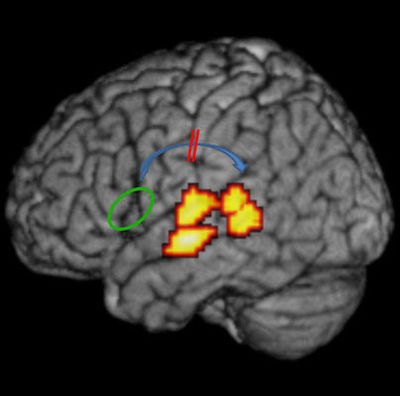 They measured synchronized low-frequency activity  a kind of background chatter characteristic of circuits that tend to work in concert. For both groups, those signals suggested functional connectivity was normal between hemispheres of the auditory cortex  the area associated with phoneme recognition.

But the white matter tracts connecting the phoneme area to a part of the brain that contains the Broca’s area, which regulates the conversion of language to speech, was weaker for the dyslexics as a group, the study found.

On an individual basis, that connectivity deficit correlated with low scores on such tasks as word or non-word reading, verbal memory and phoneme discrimination.

“For a long time it was thought that in dyslexics the data on the server are somehow degraded,” said Boets. “Yet, here we show that the quality of the data is intact, but the connection to reach this data is too slow.”

The implications of the study on therapies are unclear. Boets and fellow researchers hope the work could lead to therapies that stimulate discrete regions of the brain.

Less invasive clinical intervention focuses on creating and augmenting mechanisms to compensate for processing difficulties, particularly among children, whose brains are far more flexible than those of adults.

Indeed, the type of volunteers used in the experiment  college students at a prestigious European university  suggest they likely benefited from interventions and had compensated for their disabilities, said Dr. Sandra Loo, a psychiatrist who studies and treats children with dyslexia at UCLA’s David Geffen School of Medicine.

“You have to remember that this is an adult sample, and we know that the brain is very plastic,” Loo said. “Most people with dyslexia get some sort of treatment, and we also know that dyslexia is one of those conditions that we actually are pretty good at remediating.”

Children will switch from the language centers of the left hemisphere to the right, then switch back as their abilities improve, Loo noted. Studies have documented these neurological shifts as well as the neurological improvements that ensue over time, she added.